As a compensation over the 1MDB scandal, the country publicly stated demand of US$7.5bn, recently. Now that Malaysia has been offered less than US$2bn in compensation from Goldman Sachs, the country has openly rejected the compensated amount.

The Malaysian prime minister, Mahathir Mohammad stated on Friday that “Goldman Sachs has offered something like less than $2bn.We are not satisfied with that amount so we are still talking to them. If they respond reasonably, we might not insist on getting that $7.5bn.”

Malaysia has charged Goldman along with 17 current and former directors of its units for allegedly misleading investors over bond sales with an culminative amount of US$7.5bn that the US bank helped raise for the sovereign wealth fund 1Malaysia Development Bhd (1MDB).

Goldman declined to comment on the given matter and an immediate response wasn’t received from their end. Later on, Goldman said last month it was in discussions with authorities on the possibility of a resolution of investigations relating to 1MDB.

1MDB was founded in 2009 by the then Malaysian prime minister, Najib Razak. Back then 1MDB channelized about US$4.5bn as per the US authorities. The scandal was the main reason which helped Mahathir defeat Najib in the general elections of last year.

The ephemeral financier Jho Low, accused of playing a central role in the 1MDB scam wasn’t contracted by the south-east Asian country who were not negotiating or in contact with him, as per Mahathir. Low has consistently denied the wrongdoing and stated himself to be given a clean chit. He said he does not expect a fair trial in Malaysia as long as Mahathir is in power.

The US Justice Department stated that they had struck a deal to recover US$1bn in funds allegedly looted from 1MDB from Low, in a record haul for an US anti-corruption probe. However, the deal does not include an admission of guilt or wrongdoing and is not tied to criminal action against Low. 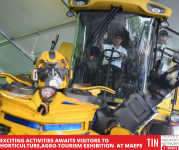