NEW YORK, Oct. 13, 2021 /PRNewswire/ -- Next Gen Foods, Asia's leading food tech startup, will provide an exclusive sneak peek of TiNDLE, the first chicken from plants designed specifically for chefs, at The Food Network & Cooking Channel New York City Wine & Food Festival taking place Oct. 14-17. U.S. consumers and chefs will have an opportunity to taste TiNDLE for the first time prior to the product's official launch in restaurants in the near future. 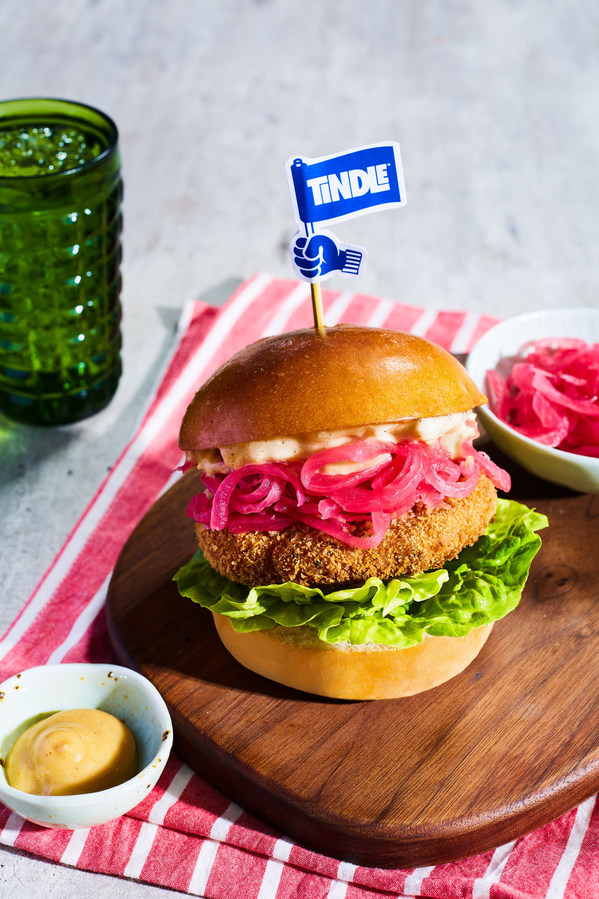 Made with only nine simple ingredients, TiNDLE is the first product from Next Gen Foods, a year old food technology startup helping to make the global food system sustainable with delicious food. TiNDLE is a versatile, easy-to-work-with, plant-based chicken that can take center stage in any dish, from butter chicken to nuggets, sandwiches and tacos.

With no compromise to taste, texture or versatility, TiNDLE has already become a favorite among discerning food connoisseurs in Singapore and Hong Kong, where it debuted earlier this year to rave reviews. TiNDLE is now served in about 150 restaurants in Singapore, Hong Kong, Macau, Kuala Lumpur and the UAE.

James Beard award-winning chef and cookbook author Rocco DiSpirito will serve as a culinary advisor supporting the brand's strategy to introduce TiNDLE to trend-setting restaurants throughout the country. As part of the initial U.S. sneak peek, DiSpirito and his team will be presenting imaginative applications of TiNDLE for NYCWFF goers to enjoy, including Chicken Parm Sliders and Lotus Leaf Bao.

"I share Next Gen Foods' commitment to making delicious, healthy and sustainable foods -- and as a chef, I'm always on the hunt for breakthrough ingredients with a mission," said DiSpirito. "TiNDLE's ability to morph into different cuisines and plant-based ingredients is game changing. In my role as culinary advisor, I can't wait to connect with other chefs as it takes the plant-based world by storm."

TiNDLE will be previewed at NYCWFF, one of the world's most important homages to food—with a particular focus this year on sustainability and food equity. The four-day event features America's most beloved television chefs, raising money for food banks to nourish Americans affected by COVID, other illnesses and food poverty.

Next Gen Foods plans to officially launch TiNDLE in U.S. restaurants next year and is actively engaging chefs in key markets to try the product first-hand and apply their personal flair.

"We've been receiving excellent feedback from chefs and diners in Asia and the Middle East. It's the perfect time to land in the United States in the midst of the nation's growing love for simple, plant-based food," said Next Gen Foods' Co-Founder and CEO Andre Menezes. "Americans want food that's nutritious, delicious and sustainable, and we're positive that TiNDLE will be a great match."

Earlier this year, Next Gen Foods launched TiNDLE in its home market of Singapore, quickly expanding to Hong Kong and Macau. Last month, TiNDLE debuted on menus in the UAE, where it became a top seller in some of the region's hottest restaurants, beach clubs and resorts. It's served in dishes ranging from crispy chicken slider sandwiches to traditional Japanese toban-yaki-style chicken.

A global team for global scale

Next Gen Foods was founded in 2020 by Brazilian-born poultry exporter and food industry veteran Andre Menezes, and German native Timo Recker, whose family business made schnitzel and other meat products for three generations.

After a chance meeting at a business incubation projector, they decided to work on products that reduce humanity's reliance on animal agriculture. They named their first product TiNDLE as a modern reference to 19th-century Irish physicist John Tyndall, who proved the connection between atmospheric CO2 and the greenhouse effect.

Next Gen Foods is funded by a $30 million investment from Asian and American venture capitalists, the largest initial round ever for a plant-based food startup. Global celebrities including English footballer Dele Alli and business guru Chris Yeh are also investors.

The company is using their extended seed round investment to fuel global growth and increase the pace of hiring. Next Gen Foods, which currently employs 30 people, is actively recruiting mission-oriented people to double their employee base in the United States, Europe and Asia.

In the past quarter, the company hired Alex Ward as Chief Operating Officer (formerly head of regional innovation APAC at global flavor and fragrance creator Givaudan); Rohit Bhattacharya as Chief Financial Officer (former director at Temasek); Charlotte Teo as Global Marketing Director (former marketing lead at Johnson & Johnson); and Rachel Konrad as the first independent member of the board of directors (formerly head of communications at Tesla and Impossible Foods).

Interested U.S. chefs, restaurateurs and sales parties who would like to be early TiNDLE adopters can send a note to usapartners@tindle.com.

About Next Gen Foods

Founded in 2020, Next Gen Foods is a food tech startup developing and commercializing innovative and sustainable plant-based food products, including its flagship product, TiNDLE. Next Gen Foods is backed by a team with proven experience in plant-based food technology, global brand development and global distribution scaleup. For more information, visit nextgenfoods.sg.

TiNDLE is a juicy, plant-based chicken that offers mouthwatering taste, texture and versatility. TiNDLE is made without animals and with a fraction of the land, water and energy used to produce meat from birds. TiNDLE brings people together for a mind-blowing taste experience that also benefits the planet. TiNDLE is the first brand created by Next Gen Foods, a Singapore-headquartered food tech company developing and commercializing innovative, sustainable foods. For more information, visit www.tindle.com or follow @tindlefoods on Instagram.

US reopens to international travellers on November 8

10,000 take Melaka river cruise since reopening of the tourism sector