MementoMori, the New RPG Rising in Popularity Throughout Japan, Has Opened Pre-Registration for Overseas Users

TOKYO, Jan. 14, 2022 /PRNewswire/ -- Bank of Innovation, Inc. (HQ: Shinjuku-ku, Tokyo; President and CEO: Tomohiro Higuchi, hereinafter referred to as "BOI") is pleased to announce that they have started accepting pre-registrations for overseas users on all social media platforms for their new smartphone RPG, MementoMori, which has already amassed more than 100,000 pre-registrations to date. 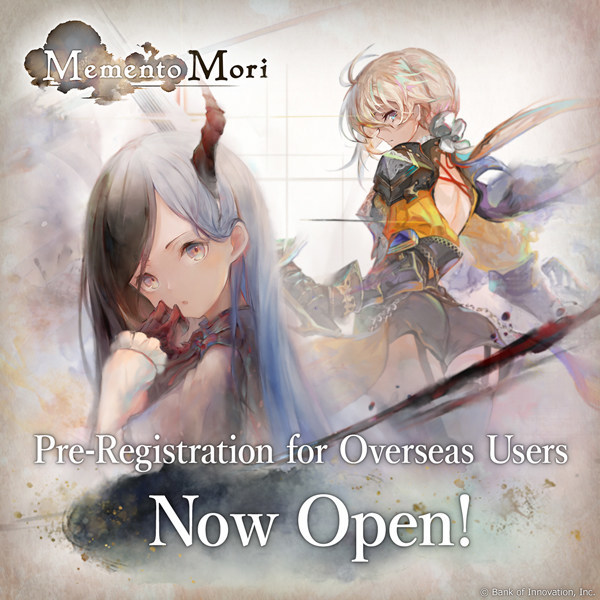 There are girls who many call "witches."
Although they themselves are ordinary, they can wield slightly extraordinary powers.
However, when calamity spreads throughout the land, witches begin to be feared and detested.
Before long, the Church of Longinus commenced what would be known as "The Witch Hunt."

Witches are executed one by one.
But one day, as madness seizes control of the world, it is suddenly overrun by Curses.
Such are the woeful desires of those who are called "Witches of Qlipha."
Finally, the fractured land is sent adrift high into the sky.

Meanwhile, the people have yet to take notice.
From within these girls cursed to be witches, there emanates glimmers of hope.
In order to save their decimated world, these girls set forth liberating the land from darkness.
For they believe that it is the right thing to do...

*Language on the website can be switched between Japanese, English, Korean, and Traditional Chinese.

MementoMori introduces girls who are burdened with cruel pasts and inevitable fates. Everyone has their own unique story, and many experienced artists sing them to life as "Laments"—special character theme songs that offer glimpses into the girls' vast, tragic world. With stories and "Laments" that will leave a mark on everyone's hearts, as well as performances by a cast of talented voice actresses, users can fully immerse themselves in the trials and tribulations of each character as they bravely traverse the perilous world of MementoMori.

*The above are the artists and voice cast of the Japanese version.

For overseas users, MementoMori has opened social media pages with support in English, Korean, and Traditional Chinese. Pre-registration can be done using any of the methods below.

Through "craftsmanship," BOI provides "memories" that will be etched in the hearts of users for many years to come.

Ministry to revive music festivals in Sarawak despite Covid-19 challenges

Tourism Malaysia kicks off promotion in Europe at FITUR 2022